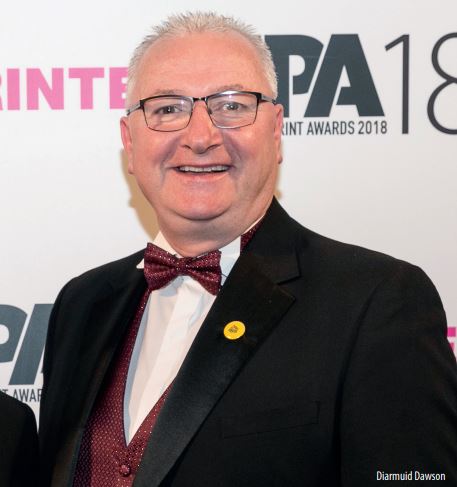 Irish Printing Federation President Diarmuid Dawson talks to Denise Maguire of the Irish Printer about the ongoing issues affecting the print industry and the new challenges brought about by Covid-19.

At the start of 2020 I had a chat with Diarmuid Dawson, Irish Printing Federation (IPF) President and MD at Innovative Print Solutions Ltd and Dermot Downer, Vice President of the IPF and MD at Westside Press Ltd.

At the time, we had all heard about Covid-19 and its devastating consequences but it was something that affected other countries and hadn’t yet reached our shores (or so we believed). During our chat, Diarmuid and Dermot talked about some of the challenges facing the sector; the importance of effectively communicating prints’ green credentials, the ongoing apprenticeship issue and the fact that jobs were still leaving the State to be printed elsewhere. As the year comes to a close, I once again caught up with Diarmuid and while all of those issues are still impacting the sector, Covid has taken top spot as the single biggest challenge facing print firms going into 2021.

The cancellation of weddings, corporate events, sports and music festivals have had a huge impact on the print industry. Commercial print has, says Diarmuid, been hit the hardest. Some smaller firms may not be in a position to open their doors again. “Right now, we don’t know what the situation is as people are availing of the financial supports that are out there. Until people are back to work properly, we won’t know but we are aware that quite a few companies are really feeling the pinch. It’s just not possible to operate on 50% of your business and that’s the situation for a significant number of firms at the moment,” said Diarmuid.

Firms producing material for the pharmaceutical, packaging and labels sector are better placed to weather the current economic uncertainty. “That was a trend we noticed at the Irish Print Awards last year, when several label firms won awards. There are still plenty of companies producing Covid-related material; it’s great to some positivity coming out of what has been a bad year.” The pandemic has fuelled some print firms’ creativity over recent months; Trimfold launched the Sanilope, a new sanitised cutlery envelope designed to keep cutlery safe and hygienic in all hospitality and catering settings, while Print Media Services came up with VisorLite, a disposable cardboard face shield that’s currently being used by staff in the Little Museum of Dublin. “A little bit of ingenuity in these uncertain times is very encouraging. We’ve seen some very clever products over the past while and I hope it continues.”

When I spoke to Dermot and Diarmuid earlier this year, there was a very real sense of disappointment over the stalled apprenticeship scheme and the lack of engagement from Solas. “Nothing has changed. We have about 45 apprentices on the books who are ready to take up a printing apprenticeship but we have nowhere to send them. We feel we’ve been very let down by Solas and there’s very little point in talking to them anymore. At the end of the day it falls at their door. Our next step may have to be reaching out to Minister Harris as we have reached a dead end.”

Diarmuid is highly critical of the “misguided marketing messages” that say printing less is good for the environment. “It’s something we regularly come across and it’s just not true. More than 90% of print materials are recyclable. Sustainable forests are increasingly supplying the materials to print and even the chemicals and inks that are currently being used are eco-friendly. What these people are failing to see are the backup infrastructure and storage facilities required for online that require three or four times as much energy. Just because you don’t see it doesn’t make it eco-friendly.”

“Uncertainty” has been the buzzword of 2020 but it perfectly describes the environment caused not just by Covid, but also by Brexit. “Obviously Covid muddied the water there for a long time but Brexit is back on the agenda now. We don’t know what the outcome will be but there is a possibility that it will put a stop to work going up the North. We know for a fact that work is getting produced in the UK and further afield in Europe. With border controls going in, will less print be produced in the UK and Northern Ireland? I hope so but at this stage, we don’t know.” Print subsidies going into Northern Ireland from the UK have made it much cheaper for firms in the south to export their work up north. It’s an ongoing, frustrating issue and one that Diarmuid hopes will change in 2020. “I am finding that not for profits, charities and pretty much any organisation that cannot reclaim VAT uses the north and UK to avoid the VAT charged here. People think this is a border/import VAT exemption but it’s more to do with the fact that the UK doesn’t charge VAT on print. Also, if a charity purchases print for fundraising purposes, let’s say it’s a collection box, any items that are part of that campaign are VAT exempt. For example, if you get a pen or daffodil or a badge, they too are purchased VAT free. We have a real problem when Irish firms aren’t supporting the local print industry.”

The fact that the UK is leaving Europe won’t make a difference to the amount of Irish print being produced over there, says Diarmuid. “It may initially be more cumbersome but I think we should be highlighting the GDPR implications to clients, particularly if data merging is taking place in the north and the UK. That’s a big no-no going forward.” Once the UK decided to leave the EU, Innovative Print Solutions lost a large chunk of its business. “Traditionally, we would do a lot of corporate finance and shareholder print work, business that would have come as a result of companies taking over other companies.

For more than two years now, that side of our business has been adversely affected. In many respects though, we’re lucky. We’re an essential supplier thanks to the security work we do with the HSE so I’m very appreciative of that.” There have been some bright spots in the print sector over the past few months. With so many members of the print industry on furlough, the Design, Print & Packaging Skillnet stepped up by providing a host of online courses, the majority of which were free of charge. “Brian Colleran and his team did tremendous work this year. Training and upskilling your workers to allow your company to adapt and evolve with a rapidly changing industry has never been more important.” Despite the year we’ve all had, Diarmuid is quietly optimistic about the future. “As an industry we need to put our best foot forward. We need to be as competitive as we can and hopefully, we can get back to some kind of normality early next year. We’ve got a lot of work to do but the print industry is well up to
the challenge.”