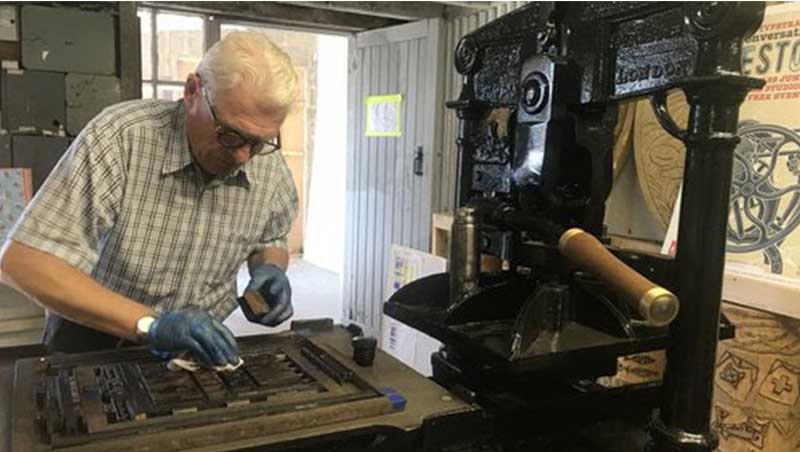 A rare printing works, dating back to the late 19th century has been restored and returned to Kells, Co Meath.

The printing presses and old-type fonts, dating back to 1831, were found in a workshop where a calendar still marked the date of its closure and the death of its owner Briany Finnegan on 6 May 1983.

Following his untimely death, Briany Finnegan’s sister Annie closed the workshop and it was not discovered again until her death in 2016.

“He left the printing press on the 6 May 1983. He went in for his lunch and dropped dead. His sister kept him it as shrine to him” said Mark Smith, community artist and member of the Kells Type Trail.

Mr Smith said: “The last print job was still there, it was tickets for a GAA dance. I’m sure the GAA dance went ahead but they didn’t have the tickets.”

The printing works have brought back memories for many people in the town but also for people who are working in the printing industry.

“They’re a treasure, an absolute treasure. They brought me back so many years to when I was a young guy working at this. I’m absolutely amazed at all the work carried out on these machines, to bring them back to their former glory” said Freddie Snow, a volunteer with the National Print Museum.

The contents of the complete printing works have now been donated to the people of Kells by the last living member of the Finnegan family Fr Sean Finnegan, who inherited the printing works on the death of his aunt Annie last year.

The printing presses have gone on display in Kells this weekend, as part of the Hinterland festival.

It is hoped a more permanent home will be found for the printing works in the coming months, which will add to the already established Kells Typing trial initiative.

Those involved, who want to celebrate type as an art form, say they hope to showcase a history of lettering in the town which began with the Book of Kells.